Why The MIC Exhibition Design Has Been So Popular At The IDEX, Abudhabi?

Let’s say you’re assembling a jigsaw puzzle, one that has many parts & pieces, and requires on your part painstaking planning, patience and a healthy dose of creativity. Now like all puzzles, this one too must turn out to resemble the exact mirror image of the final picture when actually complete. Sounds like child’s play, but as anyone who has ever built a jigsaw before will tell you, it is challenging as it is exacting.

Nevertheless, when complete in its entirety, the process from assembly-to-finish is one that can be described as a highly rewarding one especially as you’re building up things from the word ‘go’ and seeing come to life the picture as a whole.

Piece By Piece The Masterpiece Comes Together

Much like the jigsaw puzzle we spoke of earlier, the art of exhibition design requires meticulous groundwork, fortitude, dogged persistence, ability to micro/ macro manage and phenomenal levels of ingenuity, all assembled together piece by piece starting from the conceptual design blueprint to the final product- a masterpiece.

As a foremost exhibition design company operating out of The Middle East, Miraj Media has demonstrated capabilities in the planning, designing, production and campaigning of par excellence exhibition stands, most of which have been made-to-order for exclusive, crème de la crème clients based here.

A Case In Point

Over the years we’ve had the chance to showcase our capabilities many a times, however, every new opportunity presents us with the prospect of doing something that has never been done before. One such instance is the MIDC booth at the International Defence Exhibition and Conference (IDEX), Abu Dhabi.

To The Deserving One It Goes

The prestigious Military Industries Corporation (MIC) was participating in IDEX, a premium platform in which participants from GCC and MENA countries and the global attendees alike are regarded as the ‘who’s who’ of the defence industry, governments and armed forces. IDEX is regarded as an extremely key and prominent exhibition, one that is much awaited, as it is the only international defence exhibition in MENA.

MIC invited a tender for the design & production of a bespoke exhibition stand that would fittingly illustrate their sophisticated, up-to-the-minute technological capabilities.

Needless to say, Miraj was commissioned as the design company of choice that would exclusively fabricate an exhibition stand for the prestigious Military Industries Corporation (MIC).

At the very core of the design concept, the exhibition stand had to express elegance and yet convey the high-level of technology that the Military Industries Corporation (MIC) possessed. Something that is easier said in design than done in ground reality, nonetheless, Miraj Media’s core competency is to translate complex concepts into uncomplicated designs that efficiently convey MIC’s core business proposition and leave audiences awestruck. 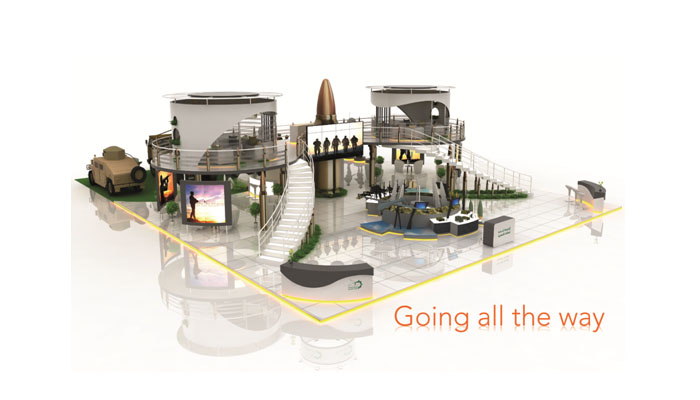 Going All The Way

The team at Miraj Media pulled out all the stops in the conceptualization of the MIC exhibition booth. Let’s just say the 20 x 26.5mtr exhibition arena was reminiscent of a combat zone, replete with model army/ military officers in uniform and warrior ground/air vehicles.

A bullet shaped structure was the centre stage of the booth and might we add was the hero of the show. As a means of increasing visitor engagement, the booth showcased soaring metaphorical paraphernalia and combat equipments with many curved and slanting arches that created an aura of a portal-like impression.

Come Inside The Ideation Room

In order to showcase specific exhibits by MIC, we created three select luminous & dazzling areas that were intended to be the focal points of the booth. An increased experiential experience was the purpose of the booth and hence, the meeting areas (or what we like to call war rooms) were intentionally constructed on a mezzanine level, making way for ease of mobility within as well as delighting attendees by creating specific spaces that offered sweeping views of the booth and of the exhibition arena.

From Thought To Ascending Reality

Our experience comes with knowledge- the intricate know-how of how the exhibition industry works. To that end, our designs are practical yet spectacular, rooted in functionality yet larger than life. Never resting on our many laurels, we’re inspired by the next.

Watch this space for our next big update!
Visit www.mirajmedia.com/credentials